“There are only a few places in the world where the university, the laboratory, and the hospital are located next to each other and where they collaborate so closely together. Maastricht is one of those places. Patient care and research are literally in the same place allowing doctors in training to do research as well as taking care of their patients.” 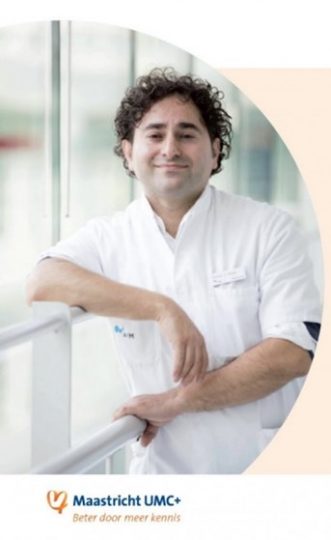 Prof. Dr. Yasin Temel grew up in “Twente”, a region in the Eastern part of The Netherlands. He moved to Maastricht to study Medicine at the University of Maastricht. One of the main reasons he continues his career here was because of the unique and strong collaboration between the Maastricht University and the hospital MUMC+. There are only a few places in the world where the university, the laboratory, and the hospital are located next to each other and where they collaborate so closely together. Maastricht is one of those places. Patient care and research are literally in the same place allowing doctors in training to do research as well as taking care of their patients.

Work and private life are easily combined in Maastricht according to Prof. Dr. Y. Temel. He loves living in Maastricht because the city is compact and it offers all the facilities of a large international city. Also, its strategic location within the EU-region and good infrastructure made him decide to live there with his wife and two daughters.

Prof. Dr. Y. Temel is currently a Professor of Neurosurgery at the University of Maastricht and Neurosurgeon at the MUMC+. Besides practicing general Neurosurgery he specializes in two clinical and scientific areas of interest:

It was the unknown of the neurological part of the brain that made Prof. Dr. Y. Temel decide to choose deep brain stimulation and complex tumors as his areas of specialization. It was only during his education in medicine that he discovered that there was not much known about the deep parts of the brain. It offered multiple possibilities both in research and surgery and therefore neurosurgery was the perfect match for him.

Deep brain stimulation triggered him as he noticed improvements of the patient right on the operation table. During these surgeries, the patient is awake which is quite unique compared to other surgeries. The fact that this type of surgery is complex but pleasant at the same time made him even more interested. After some years he felt the need for challenge and so complex tumors piqued his interest. The challenge of hours of surgery to treat the same spot and the combination of controlling your impulses and the right decision making satisfied his needs.

Since 2000 Prof. Dr. Y. Temel is leading the experimental neurosurgical research team, that is active in both research areas: deep brain stimulation & skull base surgery, and complex tumors. The deep brain stimulation research started when patients with Parkinson disease started to improve as the disease got suppressed after treatment. However, they started showing other problems like severe depression, mood swings, and feeling disinhibited. This was quite remarkable because the areas of the brain that were treated were only supposed to impact mobility. Because of these remarkable results, he started his research by developing a research model for a type of brain stimulation that at the time did not yet exist. The research has shown that there are parts of the brain by which you can induce depression or fear. The same results were shown by other researchers over the world. Thanks to the several research models, different techniques that were used such as MRI, stereotaxy, neurochemistry, and neurophysiology as well as laboratories, a lot has been discovered about the functions of the brain like mobility, memory, and mood. The research is still ongoing, not only by Prof. Dr. Y. Temel but also in collaboration with other researchers.

Maastricht the place to be for neuroscience and neurotechnology

Congresses all over the world

In his early days of medicine and specialization, Prof. Dr. Y. Temel would travel to congresses about 10 times a year. At some point, he started to wind down and other colleagues attended in his place. He attends congresses about 5 times a year, mainly because he’s invited as a speaker. What he noticed over the years was the transition of the congress industry towards business-oriented programs. Congresses became less about content and more focused on the marketing of the event, which he believes is a pity. Congresses are meant to share knowledge and to network with fellow colleagues from all over the world. As of today, the networking part becomes less important because there are many other ways to network. It’s the experience and sharing the experience with others that makes a congress important and successful.

Why Maastricht is the perfect destination for congresses

Maastricht is very compact and easily accessible. Everything is easy to reach by foot or by public transportation. It’s a safe city, with a significant number of hotel rooms and there are several unique venues in the center but also in the surrounding areas. Its international character and most international university, Maastricht makes all end meet when organizing a conference or congress.