By Maastrichtconventionbureau13 September 2017May 2nd, 2019No Comments

Welcome to our feature A word from the expert. In this feature, we introduce someone who has organized a conference in our region or will do so in the future. This month, we introduce with pleasure Prof. Dr. Luc J.I. Zimmermann | Head of the Department of Paediatrics, School for Oncology and Developmental Biology (GROW), Maastricht UMC+.

1. Why did you choose your specialism?

“At school I liked exact sciences but was also interested in helping people. Between my choices of physics, engineering and medicine I went for the latter. During medical studies my interest went mainly to physiology and I did not like so much the more ‘one organ oriented’ specialties like ophthalmology, dermatology nor the specialties that had less patient contact like radiology or pathology. On the other hand I liked the more general specialties as internal medicine, surgery and paediatrics. As I also liked to work with children the choice was easy. In paediatrics there are about 15 subspecialties for ex. paediatric cardiology, paediatric oncology, social paediatrics etc…. but again I did not like so much the one organ oriented subspecialties. In neonatology I found the action of intensive care medicine together with the fast developmental aspects and physiological understanding combined with many new and innovating techniques and ethical dilemmas. The field of neonatology moves fast and within the field of paediatrics neonatal research is one of the largest fields. During my neonatal fellowship in Toronto my research interest focussed on the development of the preterm lung, on which I did my PhD and afterwards continued my research.”

2. Which conference have you managed to acquire for the Maastricht Region? Which USP’s did you use?

“In the recent past my colleague in obstetrics, Prof. Jan Nijhuis, and I organised 2 conferences in Maastricht: the Fetal and Neonatal Physiology (FNPS) meeting in 2008 and the European Congress of Perinatal Medicine (ECPM) in 2016. The FNPS is a small conference of about 150 participants which makes it very interactive with lots of discussions, the ECPM is a larger more classic conference of about 1500 participants which took place in MECC Maastricht. It was Prof. Jan Nijhuis who succeeded in acquiring both to Maastricht, but as we organised them together I learned a lot.

Charles Beckers, Business Development Manager at MECC Maastricht at the time, stimulated me to also bring the conference of the European Society for Paediatric Research (ESPR) to Maastricht, especially because I am the president of that society. In the meantime our congress has become a bi-annual combined meeting with other societies to the ‘Joined European Neonatal Societies’ (jENS) congress, held first in Budapest in 2015 with 2200 participants and this year (2017) it will be held in Venice. It is by far the largest neonatal conference in Europe and probably worldwide. We succeeded in acquiring it to Maastricht in MECC Maastricht in 2019. The historic and Burgundian, gastronomic character of Maastricht with the known name related to the ‘Treaty of Maastricht’ and the nice conference centre were strong points. It certainly helped a lot that MECC Maastricht and the Maastricht Convention Bureau prepared strong PR material as folders, slide presentations and movies about Maastricht, MECC Maastricht and our proposed conference. The strong role of the Netherlands in neonatal research and within ESPR played also an important role, including my role as president for the last 5 years.

Finally, Prof. Jan Nijhuis and I acquired together the FNPS conference again in 2018, which we will organise at the special occasion of the retirement of Jan.”

3. Which were the competitive cities and what was the decisive reason to choose for Maastricht?

“Other well-known conference cities have submitted bids as well. For the ESPR/JENS conference cities as Paris, Lyon, Prague, Lisbon, several German cities including Berlin were considered. Important factors in the decision were the selling points mentioned but also good timing in relation to the rotation through different parts of Europe, the excellent presentations prepared by the Maastricht Convention Bureau and MECC Maastricht and the active involvement of myself and several Dutch neonatologist in the society.

For the FNPS the success the success of the 2008 edition in Maastricht helped a lot as well as the active involvement of obstetrics and neonatology from Maastricht, now and in the past.”

4. What important themes will be discussed during the conference?

“The ESPR/JENS conference will shed light on new developments in neonatology from many perspectives such as the researcher, the clinical neonatologist, the nurse, the parents (as also the EFCNI is involved, which is the organisation that represents parents of neonates from all over Europe). New therapies such as stem cell therapy for asphyxia and neonatal lung disease will be discussed next to ethical differences in Europe, family centered care, care in the delivery room for extreme preterm infants, basic research in neonatal problems as severe lung and gut problems, asphyxia, brain damage, etcetera.”

5. What does the Maastricht Convention Bureau mean to you?

“The MCB coordinates the actions of many partners in Maastricht around conferences so that great conditions can be offered to congress organisers and participants. The enormous support in making bidbooks and presentations to acquire conferences in Maastricht was mentioned already and cannot be underestimated. I would also like to thank the MCB for their support during site visits and helping with any questions I had. We had great conferences already and I look forward to the FNPS in 2018 and especially to the ESPR/JENS conference in MECC Maastricht in 2019!!”

Earlier editions of this feature: 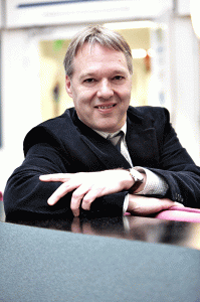