“When looking at chemistry conferences, the Brightlands Chemelot campus could be a perfect driving force, just like the Maastricht University is for health conferences. In addition, there are various interesting chemical companies in the region. And, finally, the circular bio-based character of this region is of course top-notch. I think this is a field wherein we can really distinguish ourselves, within the Maastricht region.”

Get to know Vertoro
Dr. Michael Boot is co-founder and chief executive officer at Vertoro. A spin-off company from a public-private partnership between Brightlands Chemelot Campus, DSM, Chemelot InSciTe, University of Maastricht (UM), and Eindhoven University of Technology (TU/e). Vertoro’s aim is to speed up the green revolution by offering a bio-based alternative to fossil resources. Their green gold is bold and will prove invaluable to the future of the planet. Ultimately, it can replace fossil crude oil (aka black gold) as a platform for materials, chemicals, and fuels. 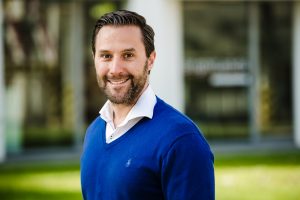 Meet Dr. Boot
Dr. Boot holds an Msc. And Phd. In Mechanical Engineering (specialty in fuel design) and an Executive MBA from TIAS Business School. From 2019 onwards, he has followed a dual career path, both as an entrepreneur and as a scientist. Just in time before the holidays, we have had the privilege to interview this local expert and guru in the field of biobased innovations and designer fuels. He is of American origin; born in the Chicago suburbs. When he was six, he moved from America to the Netherlands and he has been living here for a long time now, since 1986. Dr. Boot now lives in the city of Eindhoven, together with his wife and his two sons (5 and 3 years old).

Reversed Engineering and Lignin
Years ago, Dr. Boot started a new line of research, where he used so-called ‘reversed engineering’ concerning fuel. The question that Dr. Boot asked himself at the start was “what does an engine like to drink”. The outcome of this research resulted in a molecular composition, which bore some close similarities to lignin. The outcome was very useful, especially if you imagine that 25% of all biomass on earth is lignin. If you are wondering, what is lignin? Dr. Boot explained to us that “lignin co-evolved as plant life first moved from sea to land a few hundred million years ago. It doubles as a shield and glue, thereby providing protection against new external threats (UV, oxygen, microbes) and facilitating a load-bearing internal architecture (not needed in water on account of buoyancy)”.

Dr. Boot’s Research
In Dr. Boot’s research, he first looked at diesel engines, with a focus on lowering fine particle (soot) emissions. When the first part of his research was finished, he moved from mechanical engineering to the Faculty of Chemistry and Chemical Engineering. “There, I talked to professors about the fact that lignin resembled the molecules that had been tested in engines, but… not quite of course, so how are we going to convert that” says Dr. Boot. This is how the research gave birth to Vertoro and a spin-off company was born.

Passion and ambition
Dr. Boot’s passion lies in improving combustion technology and engines. He wants to improve the combustion process, not only in terms of bio-base but also in terms of emissions. “There are a lot of things that are bio-based, which you can put in an engine, but if you inhale them, they will not make you very happy. CO2 neutral really doesn’t say everything” says Michael. We also asked Michael about his ambition. “The Vertoro product Goldilocks can best be described as an alternative to fossil oil. Our ambition for Goldilocks is for it to be traded internationally like Brent Crude or West Texas Intermediate.

The importance of conferencing
Of course, we also wanted to know more about Dr. Boot’s opinion about conferences. After all, he gives 3 to 4 lectures annually at scientific conferences. The importance of conferences for Dr. Boot personally is the change of scenery and inspiration. After all, breaking the daily routine stimulates your brain. In addition, it is very important for his work and the university that scientists disseminate their knowledge. “Dissemination is key!” says Michael. Conferences are inspiring for Michael and provide new ideas. “This cross-fertilization that occurs naturally at every conference leads to new innovations. “When looking at chemistry conferences, the Brightlands Chemelot campus could be a perfect driving force, just like the Maastricht University is for health conferences. In addition, there are various interesting chemical companies in the region. And, finally, the circular bio-based character of this region is of course top-notch. I think this is a field wherein we can really distinguish ourselves, within the Maastricht region.” says Michael.

Vertoro – Winner of the 2021 Marc Cornelissen Brightlands Award
And, last but not least, we want to congratulate Vertoro as they became the winner of the 2021 Marc Cornelissen Brightlands Award, last month. Their advanced plans to extract lignin from wood waste, which in turn can be used as fuel for ships and as a raw material for plastics, garnered the most favor with the jury. The winner of the biennial award, a work of art and a cash prize of €35,000, was announced and presented yesterday afternoon during an event at the Brightlands Chemelot Campus.